Get Directions to Girolamo Russo

Closed: August and during harvest (mid-October) 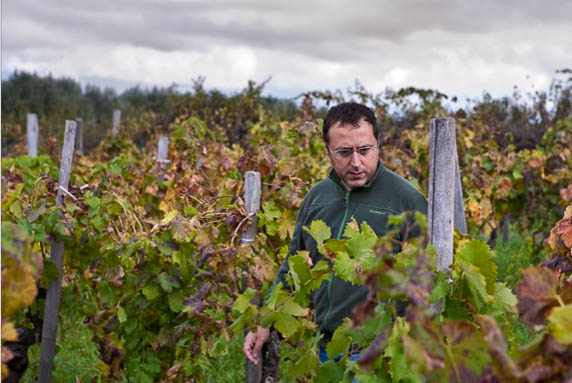 Giuseppe Russo is something of a renaissance man, with a background in music and literature and a passion for natural winemaking. The family has a long history of making small crafted wines, and Giuseppe took over in 2004 from his late father to make minerally wines that honestly express the dramatic terroir of the northern Etna slopes.

With his friend and enologist Emiliano Falsini, Giuseppe is making some pretty fantastic Etna Rosso wines that are gaining a lot of attention in the press. I met up with Giuseppe and team to experience the breadth of his crafted wines and tour the 16 hectares of vineyards he personally maintains with great respect for natural growing methods.

Giuseppe produces 3 Etna reds and an Etna white. His base Etna Rosso 'A Rina (red wine, 98% Nerello Mascalese + 2% Nerello Cappuccio, €15, 18K bottles) is named after the fine Etna ash that rains down on the vineyards from time to time, and expresses well the spicy cherry fruits of Nerello Mascalese. 'A Rina is a good, basic Etna Rosso for everyday drinking.

I'm a big fan of Giuseppe's Feudo Etna Rosso 2013 (red wine, 98% Nerello Mascalese + 2% Nerello Cappuccio, €30, 4K bottles) with red cherry, strawberry, a hint of tart cranberry & pomegranate , a touch of cocoa and smoke, and all that dark earth you come to expect in these wines. Feudo evolves over time in the glass, so you're in for a great ride. The 2011 is the current release as of Fall 2013, but ask Giuseppe if you can try his grand Feudo 2010.

For a big treat, taste Giuseppe's San Lorenzo Etna Rosso 2013 (red wine, 98% Nerello Mascalese + 2% Nerello Cappuccio, €35, 4.5K bottles)  if it's still available. This wine has everything you find in the Feudo, with more complexity and assertive tannins from spending 18 months in French oak barriques.

You can arrange a visit and tasting in Giuseppe's humble cantina with a text message or an e-mail. It can be a little tough finding Giuseppe's cantina, so it's best to meet him at a nearby coffee bar in Passopisciaro and Giuseppe will guide you over to his place.